Back to: BIOLOGY SS3

In today’s class, we will be talking about reflex and voluntary actions, conditional reflex. Enjoy the class! 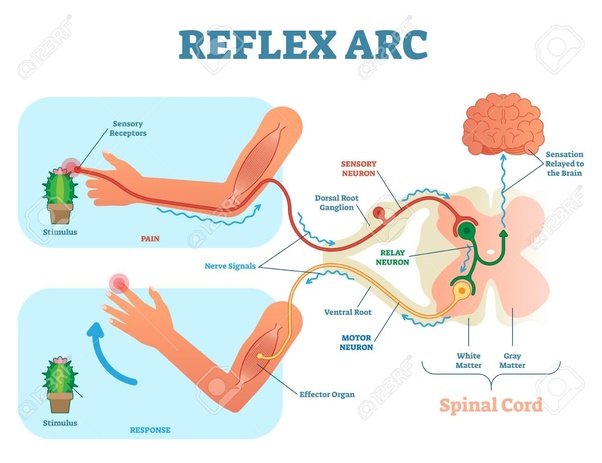 Actions are responses to stimuli. These actions are grouped into two: involuntary (reflex) and voluntary actions.

Reflex actions are automatic responses to stimuli which do not involve the conscious or higher centre of the brain.   These actions are mainly protective, guarding us from dangerous stimuli and helping us to maintain posture and balance.  Reflex actions include jerking of the legs, blinking of the eyes etc.

The reflex arc involves the following:

Reflex actions can be:

These are actions initiated and controlled by the conscious part of the brain, which involves thoughts before a performance. They involve:

Differences between reflex and voluntary actions

A reflex action may be instinctive (does not have to be learned) e. g. sucking behaviour of newly born baby or conditioned reflex (learned responses or behaviour that can be performed without thinking about it) e. g. walking, riding a bicycle, writing e.t.c. A famous Russian biologist, Ivan Pavlon demonstrates what is meant by conditioned reflex using a puppy and associating its food time with the sound of a bell.

Roles of conditioned reflex on behaviour

Differences between hormonal and nervous coordination

In our next class, we will be talking about Sensory Organs: Skin as a Sense Organ, Organ of Sight (The Eye).  We hope you enjoyed the class.