Back to: GOVERNMENT SS2

In today’s class, we will be talking about public corporation. Enjoy the class! 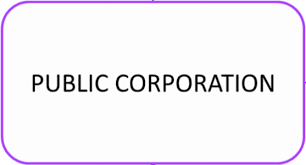 A public corporation may be defined as a business organization, owned, managed and financed with tax payer’s money by the government of a country. The aim is not to make a profit but to render essential services to the members of the public. It is established by acts of parliament and they determine their functions.

REASONS FOR SETTING UP PUBLIC CORPORATION

FUNCTIONS OF THE PUBLIC CORPORATION

A corporation has the following branches; finance section, sales section, production section, administrative section, and transport and public relations divisions etc., all work towards the ultimate goal of the corporation for which it is set up.

The public corporation can be controlled through the following ways;

In our next class, we will be talking about Local Government.  We hope you enjoyed the class.