Back to: PHYSICS SS2

In today’s class, we will be talking about the microscope. Enjoy the class! 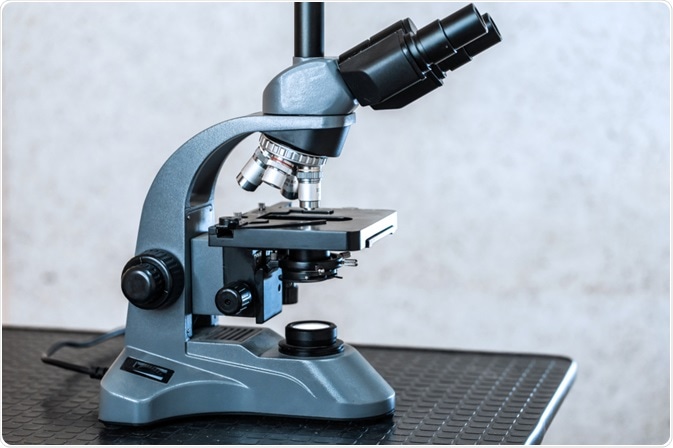 It is made up of two convex lenses, objective and eyepiece lenses, both with short focal lengths as shown in the figure 1 below. The object O, is kept at a distance greater than the focal length of the objective lens. The first image II formed is between the focus and the eyepiece lens which serves as a magnifying lens to the image II. A final magnified, virtual, inverted image I2 is formed. In practical two convex lenses are used as the eyepiece in a compound microscope and telescope, to reduce chromatic and spherical aberrations. For a final upright image to be formed in a compound microscope, the object initially is mounted upside down. In abnormal use figure 2. The final image Is formed at infinity, because the image, I is formed at the focus of the eyepiece lens.

The angular magnification, M is given by:

This is an optical instrument used for observing different objects. It brings the object close when viewing through it. There are many types, which include

This is used for viewing heavenly bodies. It has two convex lenses. The objective has a focal length while the eyepiece has a short focal length. In normal adjustment, the principal foci of the objective lens and the eyepiece coincide. Hence the distance between the lenses is fo + fe. For telescope in normal adjustment, the final image is at infinity.

Produces an erect image. It consists of an objective lens which is a diverging lens and an eyepiece which is a convex lens.

This equipment is used for projecting a real image of a transparent picture onto a screen. The components and structure as shown in the diagram below include concave mirror, light source (e.g. lamp), condenser, the slide, convex lens and the screen. The transparent picture (slide or film) is illuminated by the lamp. The concave mirror ensures that the light from the lamp is concentrated on the condenser. The convex lens produces an enlarged image of the slide on the screen. The image produced by the convex lens is inverted; hence the slide is always placed in an inverted position, to produce an image that is the right way up.

In our next class, we will be talking about Sound Waves.  We hope you enjoyed the class.